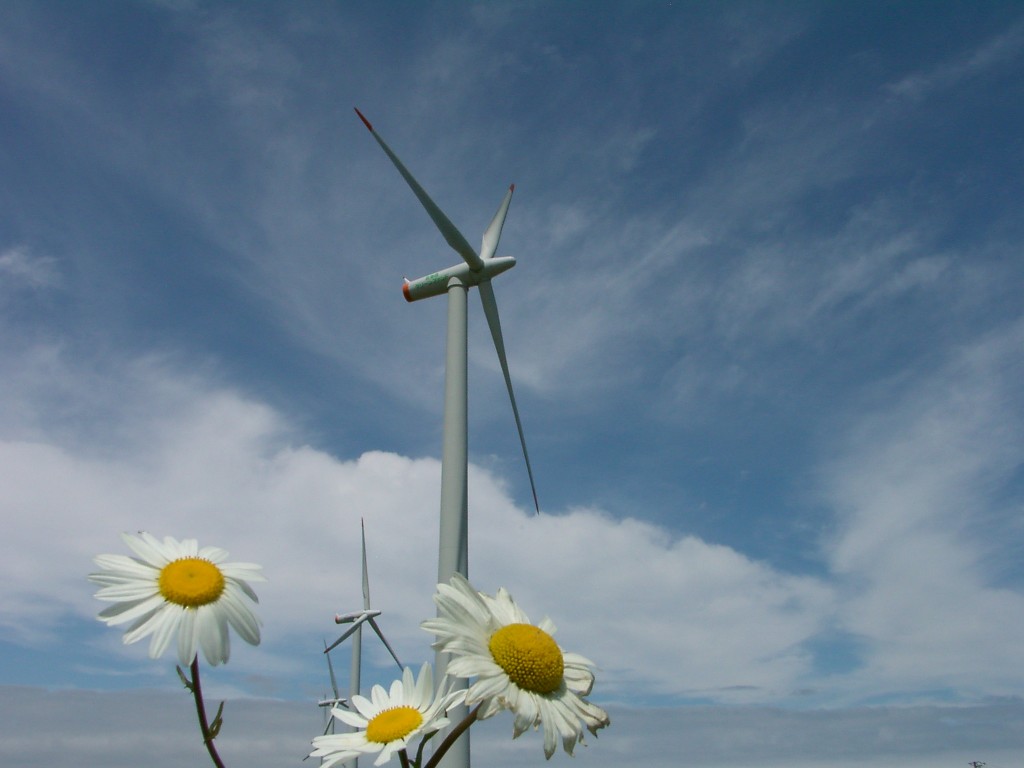 In September 2001, a wind turbine started its operation in Hamatombetsu, the northern part of Hokkaido. The wind turbine is called “Hamakaze-chan”[1], whose name was given by local elementary school children. It was the first citizen funded wind power project in Japan, and the adventurous attempt of a non-profit organization Hokkaido Green Fund (HGF) opened up the series of community based renewable energy development.

Let us start looking back the organizational background of HGF. Today, HGF is well known in renewable energy business in Japan, however, at the beginning in the late 1990’s it was not a business entity, it was a part of anti-nuclear movement in Hokkaido. As is often the case with nuclear power plant planning, there were several anti-nuclear movements such as Tomari nuclear power plant, high-level radioactive waste repository plan in Horonobe and so on. Among such anti-nuclear movements, a consumer cooperative, Seikatsu Club Consumer Cooperative Hokkaido, has been a collective voice of consumers those who were motivated by a feeling of anxiety for safe food production and living environment. In 1997, a group of members started discussion, and they thought that they should think about not only opposing nuclear power, but also making green energy by themselves. The group, who were laymen of the energy business, hold study meetings many times, collected vast amount of information and learned about green energy activities. And finally they made a book about green energy. Then, in the process of making this book, the idea of “Green Electric Bill Movement” came out and this idea triggered the establishment of HGF[2].

Green Electric Bill System is an alternative electric bill collection system. Because of the regional monopoly and vertical integration of the electricity market in Japan, household consumers cannot choose the electricity supplier, however, through the activity of anti-nuclear movement and study meetings, the group identified that there will be a number of people who would like to choose green electricity for their consumption. Then, the group developed a system that the group serves as a electricity bill collection service provider instead of Hokkaido Electric Power Company (HEPCO), and when the group collects bill, the group asks consumers additional donation corresponding to 5% of their bill[3], and the 5% donation will be saved as fund for making citizen owned green energy in future. In 1999 April, the system was demonstrated by Seikatsu Club Consumer Cooperative Hokkaido with 60 members’ participation. Then, based on this demonstration and preparatory meetings, non-profit organization Hokkaido Green Fund was established as a movement/business entity for the citizen participatory green energy development. And in December, HGF took over the Green Electricity Bill System.

After the founding work, in 2000 HGF started to consider making their own wind power project with the collected donation. However, at that time, it took about ¥200 million for a single 1,000 kW wind turbine, and soon it appeared that if HGF tried to build their own wind turbine with the collected donation, it will take dozens of years. And the barrier was not just finance, HGF was layman to the wind power project development which require specific knowledge and skills such as making construction planning, permission, environmental assessment and so on. Then, HGF faced the barriers between their mission and reality. However, it was the moment when the new knowledge was going to be produced.

At that time there was a big wind farm plan in Hamatombetsu area which was developed by a major trade company TOMEN Corporation, and fortunately TOMEN was willing to cooperate with HGF regarding to the project development and engineering. So, HGF somehow overcame barriers in project development and engineering. However, still financing problem remained. In Europe or other countries financing of renewable energy projects are normally carried out in project finance, but in Japan because of the immaturity of renewable energy business and industry, banks had never made project finance for the renewable energy projects. Moreover, banks never make loan without security, and HGF was a non-profit organization established just 1 years ago without outstanding assets, so HGF didn’t have any credibility for ¥100 million scale loan.

If it is difficult to get a bank loan, how about raising fund by ourselves?

Then, he started to research the possibility of citizen fund raising. In that process, he reached many experts, such as qualified accountant, certified tax accountant, lawyer, banker, and wind power developer. Among the experts, there was Tetsunari Iida, who is the executive director of Institute for Sustainable Energy Policies (ISEP), and he took initiative to organize such multi-experts’ collaborative work. In the collaborative effort to establish citizen fund raising scheme they hold study meetings many times, and discussed a basic framework design, detail investigation on the cash flow of the project, documentation of contract and finally they established the scheme. The citizen fund raising scheme is based on “anonymous partnership agreement” which is institutionalized in the Japanese commercial law (figure below). 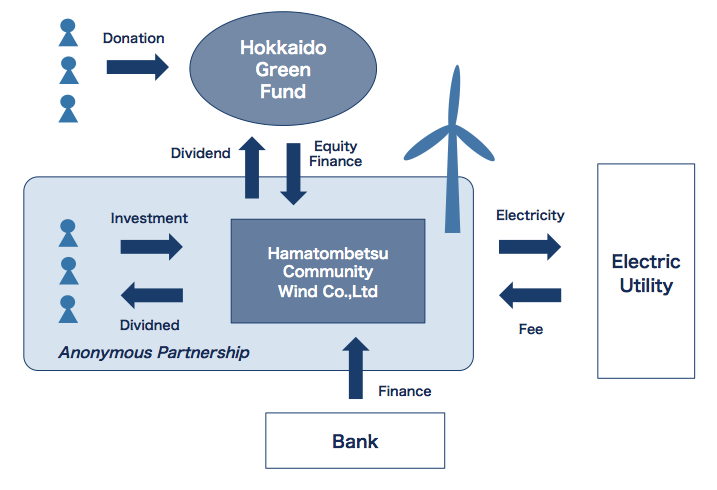 Made by author. (*Hamatombetsu Community Wind Co.,Ltd is a special purpose company made by HGF.)

In this legal framework, a fund-raiser is allowed to design scheme freely such as total amount of fund, amount of money per lot, target return rate of investment or periode of fund raising. And each investor (ordinary citizen) makes an investment contract with the fund-raiser on condition that he or she takes the risk of losing principal if the business performance was not as planned, and on the other hand liability is limited to principal, i.e. non-recourse finance. And in addition to the risk, it is also conditioned that he or she doesn’t have any voting right to the management of the business. Therefore, the risk of citizen fund raising is lower than other financial products such as equity investment or investment trust fund. On the other hand, compared with the normal bank, deposit interest rate (nearly zero in Japan) or the interest rate of national bond (around 1.6 ~ 1.7% in 20 years), average standard target return rate of citizen fund is around 2%, so citizen fund is a little more attractive than other low risk financial product, i.e. mezzanine finance.

When HGF started calling for the investment (¥500,000/lot, 17 years, 2.5%), staffs and collaborators felt half expectation and half anxiety because such wind power investment fund was new, and there was no other case in Japan that newly established non-profit organization (without credibility) collects ¥100 million scale investment for the business. However, once the investment was opened to citizen, the target amount of money (¥141.5 million) was collected from 217 investors in several months and the rest of the cost was covered by bank loan. It was pleasure surprise for HGF and collaborators.

In this way HGF overcame the serious barriers and proceeded the project development. And finally the first citizen funded wind turbine “Hamakaze-chan” started its operation in September 2001. And following this pioneer project, several community wind projects have developed around the country.

[1] In Japanese, “Hama” means beach, “Kaze” means wind, and “chan” is a rhetoric for familiarity. [2] One of the sources of the inspiration was a book of Hasegawa, Koichi. 1996. A Choice for Post-Nuclear Society: The Age of New Energy Revolution: Shinyosha (in Japanese). The book introduced the pioneer solar PV case in Sacramento in California. [3] The rate of 5% was set because if a consumer makes effort for the 5% energy saving, then the paying bill will not change, so in fact the system was not intended to call for additional donation, it is energy saving encouragement.
37
SHARES
FacebookTwitter