After the Fukushima nuclear accident in 2011, energy policy and status of renewable energy in Japan is about to change significantly. Economic impacts, including employment effects from the FIT scheme, should be estimated annually in each region of Japan. In FY2013, the dramatic introduction of renewable energy in the power sector, such as solar power, came as expected from the start of the feed-in tariffs. Other renewable energies such as wind energy and so forth have several issues caused by excessive regulations or limitations of the power system in Japan. Still, wind energy, including offshore, has a very large potential in Japan. Ambitious targets and clear policies for each technology of renewable energy are needed, and especially for wind.

The severe nuclear disaster at Fukushima Daiichi nuclear power plant, following a huge earthquake and the massive tsunami on March 11th, 2011, has highlighted the controversy over the safety of nuclear power plants. Uncertainty about the significant risks of nuclear power, along with issues of energy security, climate change, and economy, have caused a fundamental reconsideration of energy efficiency, renewable energy, electrical liberalization, unbundling transmission and demand-side management (DSM), including smart grids.

Although occasionally there have been calls for the expanded utilization of renewable energy, the amount introduced in Japan is still only about 10% of total generated electricity, including the large size hydro power facilities as shown in Fig.1. Furthermore, the status of Japan’s energy mix, and especially nuclear power generation, has changed completely after the disaster at Fukushima. The portion of thermal power generation from fossil fuel reached 88% in FY2013, compared with under 1% nuclear power generation and 10% renewable energy, including large hydro. Additionally, despite Japan’s current major reliance on fossil fuels, the highly probable rise in prices for fossil fuels will force us to alter the existing energy policy toward one based on the renewable energy. 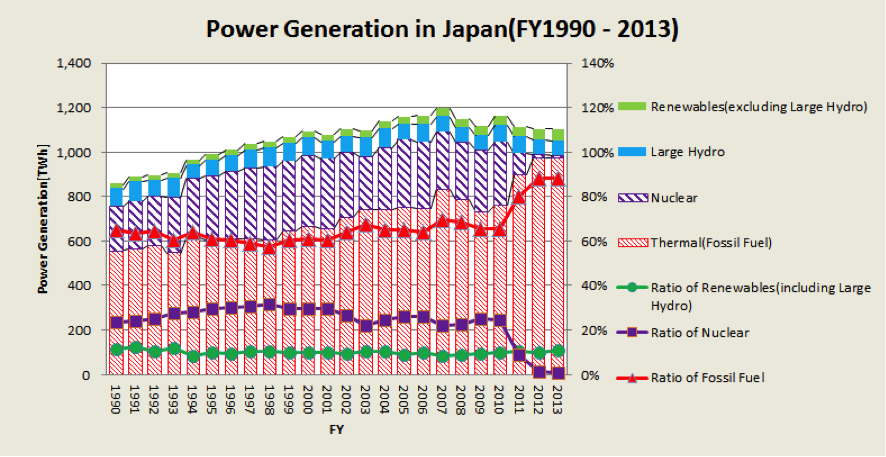 In these circumstances, the ”New Energy Basic Plan” was decided by the Cabinet in April 2014 as a result of intense debate after Fukushima [1]. The government plan has in fact provided ardent support for expanding renewable energy, but has unfortunately not presented any concrete ideas as to how this will be achieved in the medium to long term.On the other hand, the circumstances surrounding the renewable energy industry have changed dramatically since Fukushima, and the environment for the strong growth of renewable technology is becoming ever more favorable. The year 2012 was positioned as the first year for great renewable energy expansion, and 2013 has already witnessed some improvements in the adoption of green technology, though some problems are still to be overcome.

The building of strategies and organizations with the goal of introducing renewable energy has commenced in many regions across Japan. These organizations have added to the recognition and importance of renewable energy. The drive toward more renewable energy is especially high in the Tohoku region, which includes the Fukushima area, where authorities aim to utilize renewable energy to revitalize the economy. Various projects are already underway, including the concept of community power which utilizes the participation of local resources including firms, people, and energy sources. In February 2014, the International Community Power Conference was conducted in various locations inside Fukushima prefecture [2]. The main topic of the discussion was the possibility of achieving 100% reliance on renewable energy in an economy led by local companies and actors.

Perspectives on the renewable energy policies of Japan 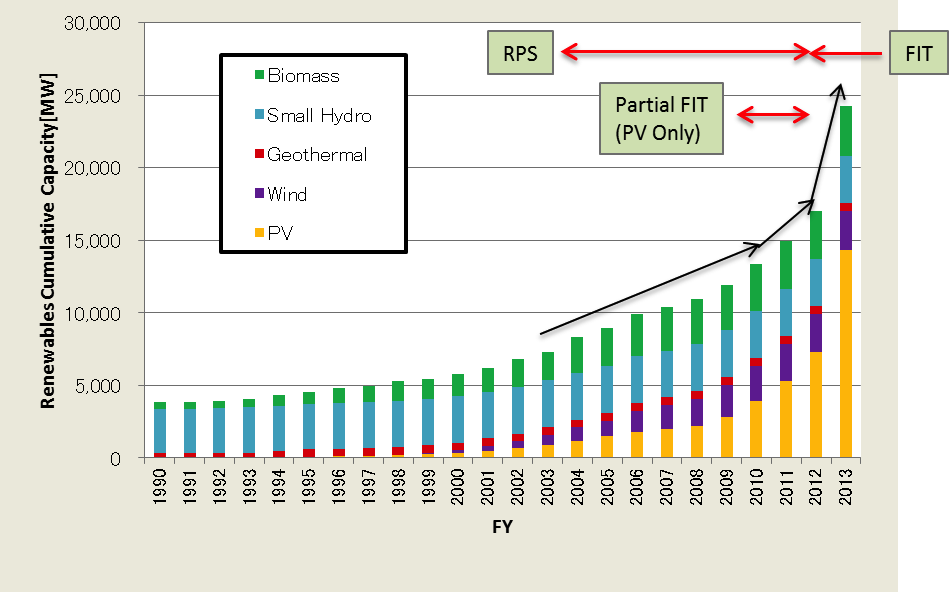 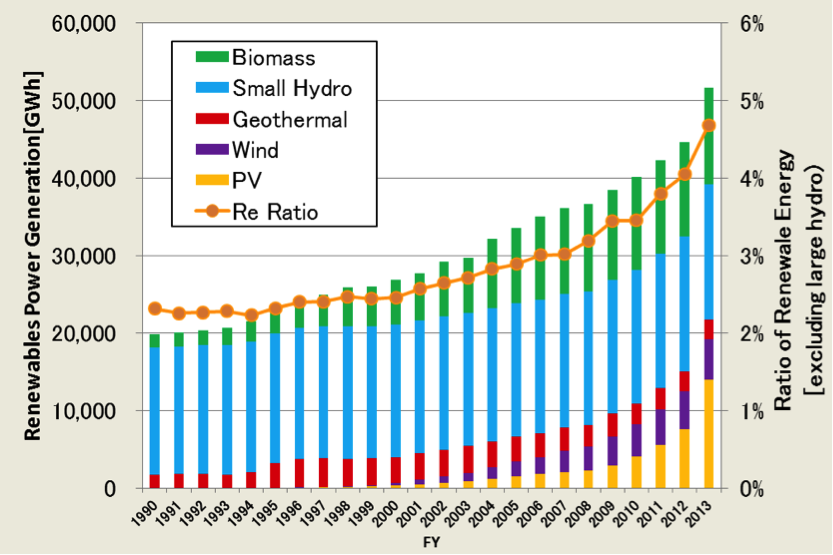 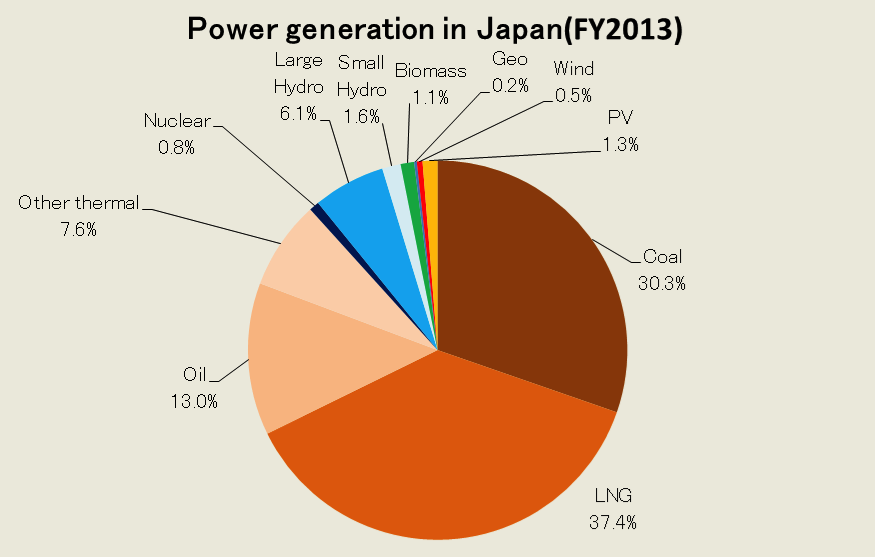 The policy of FIT which will enable the widespread use of renewable energy was enacted by the National Diet in August 2011, and began as of July 2012. In order for this FIT scheme to function effectively, however, the appropriate purchase price and purchase period needed to be set. In March 2012, the “Procurement Price Calculation Committee” was launched to discuss feasible purchase prices and purchase periods. The final purchase prices and periods were subsequently decided by the minister of METI. The price set for the newly implemented facilities in FY2014 was reached through the same process in March 2014 [6]. The purchase price of photovoltaic energy was the only change in FIT prices, due to the falling costs of the technology. Tariffs for new installations are revised every year based on advice of the committee, as shown in Table.1 Tariffs for Solar PV over 10kW drop to 32 in FY2014 from 36 JPY/kWh in FY2013. New classifications and rates for offshore wind and for small hydro were introduced in FY2014.

Table.1 New Tariffs for each technology and scale of the new project in FY2014 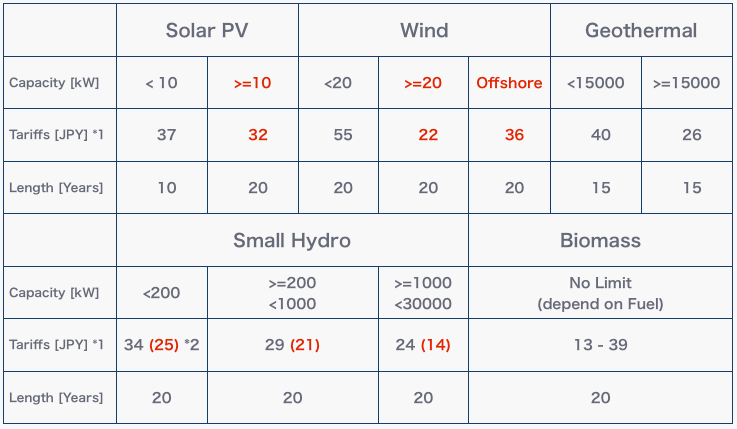 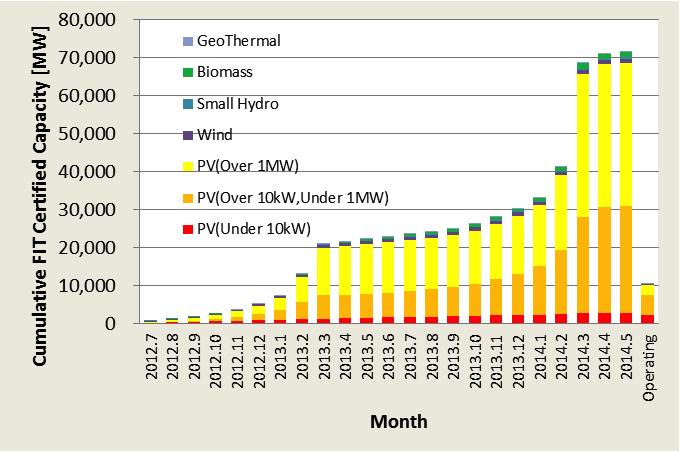 In FY2013, the total cost for FIT payments was estimated at about 480 billion JPY(Japanese Yen) and the total surcharge at about 313 billion JPY, the difference an avoidable cost of about 167 Billion Yen. However, the actual FIT payment was 579 billion JPY in FY2013 and actual electricity produced by FIT certified power plants was 18 TWh, which had been estimated at 16 TWh [3]. The latest economic effect of the clean energy market in Japan is about 3500 Billion Yen, as estimated by UNEP [7]. Employment is estimated to be over 100 thousand [8], however a detailed estimation of employment by renewable energy cannot be obtained in Japan yet. 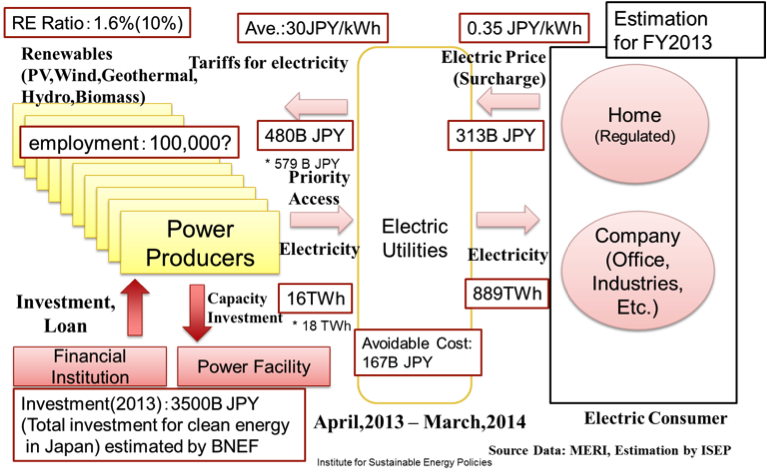 These FIT policy rules were set except for rules concerning “Priority Access”, but the current situation revealed that for electricity companies it is difficult for them to connect with a non-functioning system. To fully expand the use of renewable energy such as photovoltaic and wind energy, “priority access” must be given to renewable sources of electricity. Furthermore, reforming the system regulations is essential, especially with regarding the distribution of electricity. The regulations that must be reformed include the separation of electricity generation and transmission, along with the maintenance of the energy supply network. The parliament approved a new bill for the electricity system reform on the 11th June 2014, to implement full liberalization of entry into the electricity retailing starting in 2016 [9].

The current status of wind energy in Japan

While the total installed capacity of wind power was 2,7 GW at the end of FY2013, its annual installation capacity was still sluggish at about 65 MW, as shown in Fig.7. After starting FIT scheme, the rate of annual installations has slowed down due to various constraints, including the matter of environmental impact assessment (EIA) and grid connection issues. However, by end of FY2013, FIT certified wind farms reached a total of 1 GW, which will be built in a few years. The cumulative capacity of wind power will thus reach 3,7GW after the installation of the current FIT certified projects.

Many of these projects are undertaking the process of Environmental Impact Assessment (EIA) which is required since 2012 for larger capacity projects over 7,5 MW. The total capacity of wind farms in the EIA process reached 5,8 GW by July 2014. If all wind projects were successful through the EIA process, the cumulative capacity of wind power would be expected to reach 9.5GW in the next several years in Japan. These EIA processes need to be improved especially for shortening of the duration.

Moreover, grid issues are especially critical in the regions where conditions are good for wind but the local grid condition is inadequate. For these grid issues, several improvements are being worked on by government and power market industries over the next few years. For example, a new organization for operating a power grid intra-regionally will start to work in April 2015 as the first step of electricity system reform.

Fig.7 Trends and pipeline of wind power capacity in Japan 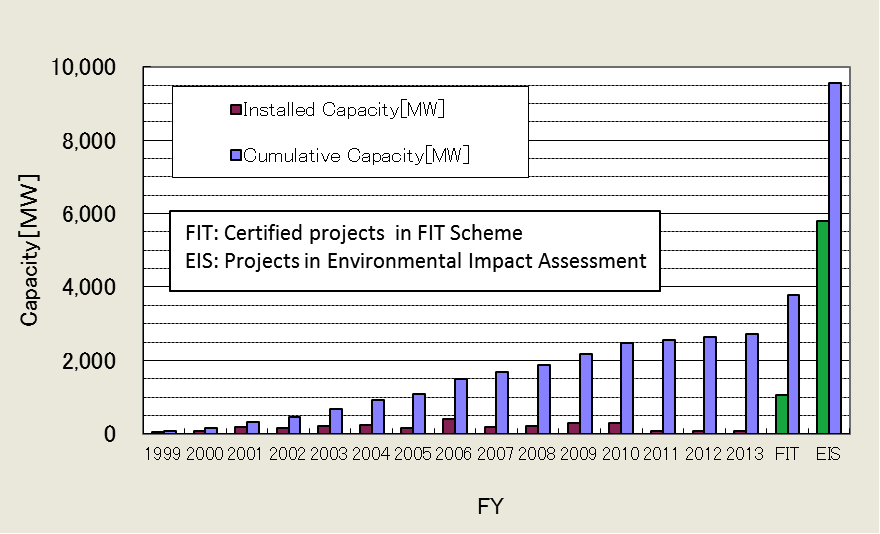 Although the Japanese Government has not yet decided on the target of renewable energy capacity, the Japan Wind Power Association (JWPA) has released the road map and scenarios for the wind energy including offshore based on calculations of wind energy resources and availability in Japan [10]. The capacity target for wind power capacity in the road map by JWPA is shown in Table.2 Annual new installations are estimated to grow to 3GW per year by 2030 and the wind power market will keep adding more than 3,5GW per year after 2030.

Table.2 Roadmap of wind energy in Japan by JWPA

Fig.8 shows the potential of renewable energy power generation in each region of Japan. The research projects to investigate the renewable energy potential were conducted by the Ministry of Environment (MoE) up until 2013 [3]. The total potential of wind energy seems much larger than the long-term target of wind capacity by JWPA. The Regions of Hokkaido and Tohoku have far more potential for offshore wind power than the installed total power capacity of each regional utility. 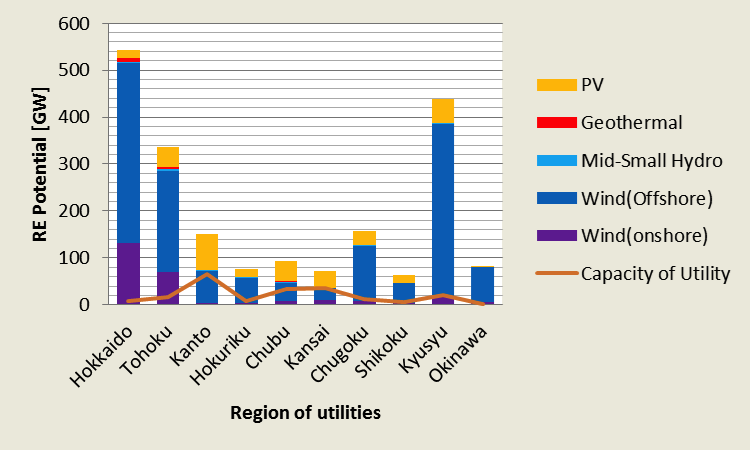