The Great East Japan Earthquake and the TEPCO’s Fukushima Daiichi nuclear power plant accident on March 11th, 2011 affected Fukushima seriously. 3 years after the crisis, still dozens or hundreds of problems affect the life of people living in Fukushima. However, led by a man with local tradition of Aizu area, a community power initiative has risen. 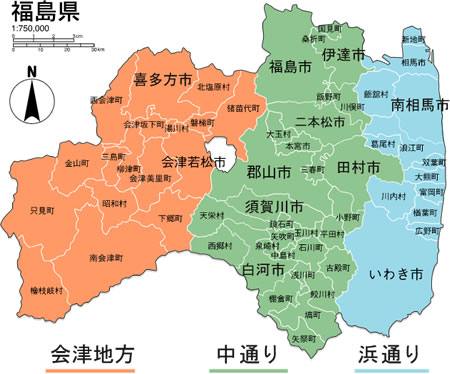 The west orange part shows Aizu area and Kitakata city is located in the north of the area. The east blue part is called Hamadori area, and the middle green part is called Nakadori.

Shock, anger and initiative of a sake brewer

Yauemon Sato, the representative partner of Yamatogawa Sake Brewery, was stuck in the shock of the Fukushima nuclear disaster.

Yamatogawa Sake Brewery started business in 1790 (Kansei 1), and the 9th-generation of “Yauemon Sato” was born in Kitakata city in 1951. He inherited the tradition of sake brewing and brewed sake with the pesticide-free rice harvested in his own local farming company’s rice fields. In addition to his main job, he is also known as a prominent figure working on the town development in Kitakata area, such as town development strategy with landscape of traditional storehouses and ramen (Japanese noodle).

His sake awarded gold medal in the Fine Sake Awards Japan and the town development strategy went well, however, the Fukushima nuclear disaster not only affected his business, but also made him think about the whole concept of “local autonomy”. 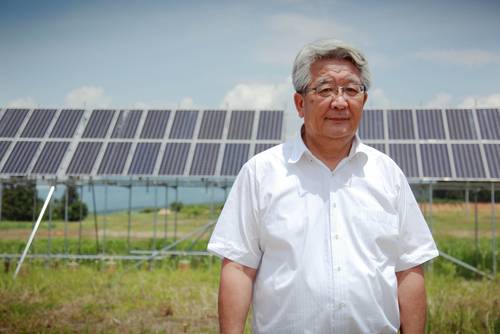 Sato remarks his thoughts as follows:

“Before the earthquake, Fukushima had the food resources ten times more than the necessary amount in the prefecture, at about 1000%. And we had several GW electric facilities except nuclear power plants. There is an enormous potential of renewables available in Fukushima. However, almost all the energy produced in the region was distributed to the city areas, and then we bought it back by our selves. Fukushima was in a situation as if it is a colony of big city areas. Then, after the nuclear disaster, the strong will to overcome the situation grew inside myself, and I decided to pursue Fukushima’s autonomous development.

I had produced sake with the rice harvested in Iitate village for more than 30 years, but the radiation has made that impossible. The effects of the radiation remain for more than 100,000 years. That is something human beings cannot control. On the other hand, renewables are sustainable resources that Fukushima has in abundance. I thought we should strengthen the region by using those resources. Rome was not built in a day. I think we need to start doing something today, to make better choices for our children and grandchildren.”

He took the initiative for Fukushima’s renewable energy development, and his colleagues, friends and many supporters joined the activities in the fall of 2012.

Soon after the earthquake and nuclear disaster in July 2011, many people including those who evacuated from Hamadori and Nakadori gathered at Yamatogawa Sake Brewery in order to avoid radiation, and they discussed the immediate problems and the future of Fukushima. At that time, among many agendas, renewable energy was taken as one of the promising options for the safe and independent energy supply.

Norio Akasaka has worked on the anthropological fieldwork in Tohoku region for a long time and he also served as director of the Fukushima Museum in Aizu-Wakamatsu. He joined the meeting and remembers the moment that the participants identified the societal meaning of renewable energy in Fukushima:

“Renewable energy is the grounds for our new future of Fukushima. This is the new Freedom and People’s Rights Movement [1].”

Some of the participants including Akasaka and Sato continued discussion again and again and it led to “Fukushima Kaigi” in November 2011.

In August 2012, Sato visited Tetsunari Iida, the executive director of Institute for Sustainable Energy Policies, and asked for the support to start community based renewable energy planning and development. Iida visited Kitakata city in Aizu area in November and he advised to set up institutional platform for broader public participation in Aizu area. Then, the abstract initiative came into concrete process, and through this participatory process, many scattered initiatives converged and it became the basis for the next step.

Based on the consensus on the need for a entity for such broader public participation, they established “Aizu Natural Energy Foundation (AiNEF)” on March 2013 with the board chairperson, Norie Igarashi. She has worked on the anthropological education in Aizu area with the local publisher Okuaizu-syobo’s editor in chief, Yumiko Endo. And then AiNEF hatched the business operational entity “AiPOWER” on August 2013. Yauemon Sato became the CEO.

Many skillful members have cooperated in AiPOWER’s activities. For example, Jun Yamada was born in Fukushima and he had worked on telecommunication industry and served as the president of Qualcomm Japan. Stepping aside the position in May 2012, he joined the preparatory work of AiNEF and AiPOWER, then he became the vice president of AiPOWER and he has contributed to the management of the company with his experience.

Tetsuya Orikasa was born in Aizuwakamatsu, and he ran Japanese style bar before March 11th 2011, however, when the earthquake swept away coastal communities and nuclear disaster contaminated Fukushima’s air and land, he decided to engage in something related to Fukushima’s future, which is worth to devote rest of his life. Then he learned renewable energy business and started his own solar energy company. At the same time, when he listened to Sato’s speech, he empathized the concept of “local autonomy” and decided to join AiNEF and AiPOWER’s activities. He has served as the executive managing director of AiPOWER and contributed to the solar PV project development with his skillful business capacity.

In addition to these extensive cooperation of the locals, many external experts supported the platform building and project development, such as Tetsunari Iida (Institute for Sustainable Energy Policies), Tohru Suzuki (Hokkaido Green Fund), Takejiro Sueyoshi (Green Finance Agency) and so on.

For the first project, AiPOWER has worked on distributed solar PV project in Aizu area. 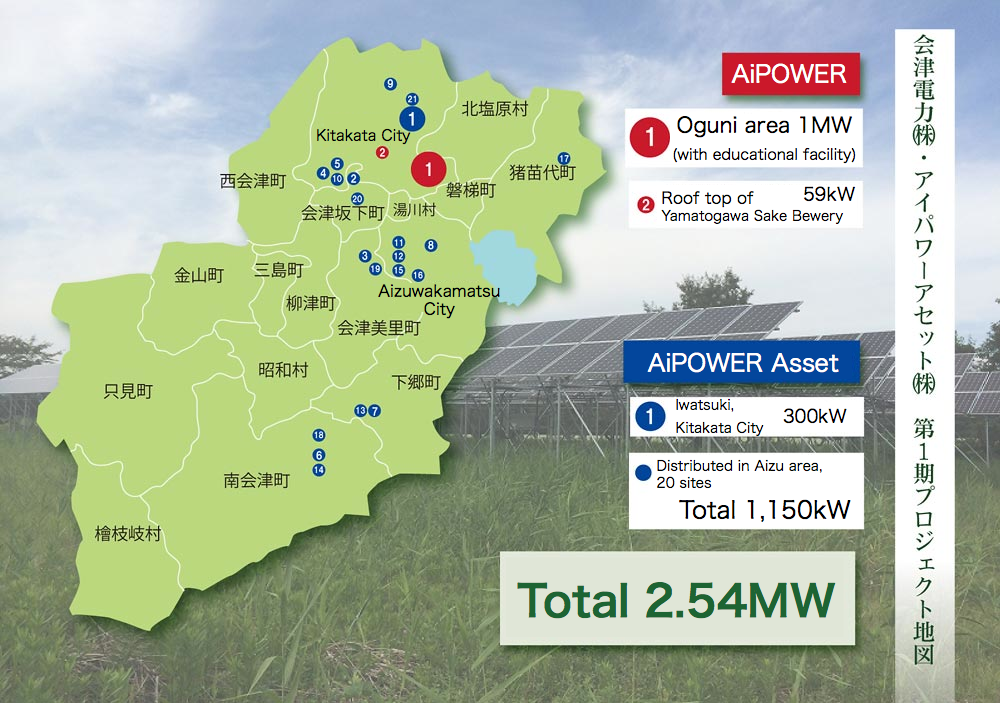 Among the 23 project sites, there are several symbolic solar PV facilities. Oguni Power Plant is the largest facility of 1 MW with wooden educational facility. 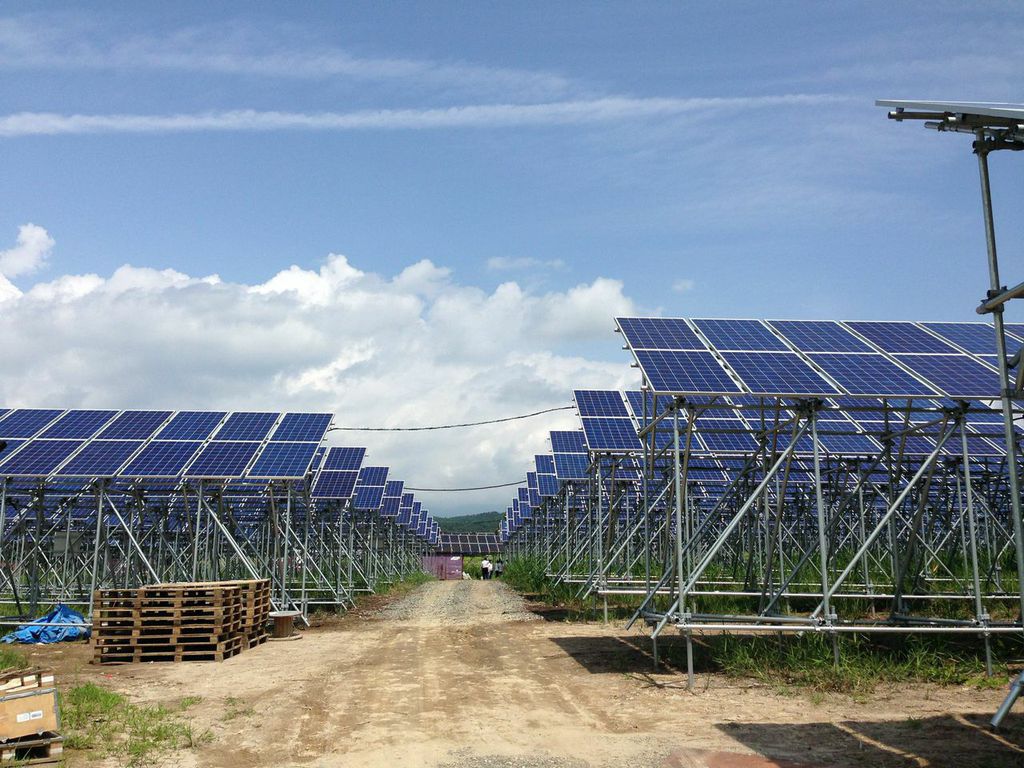 Oguni Power Plant. Because of the deep snow in the winter, the mounting system has the height of 2.5m and the tilt of 30-45 degree. (AiPOWER) 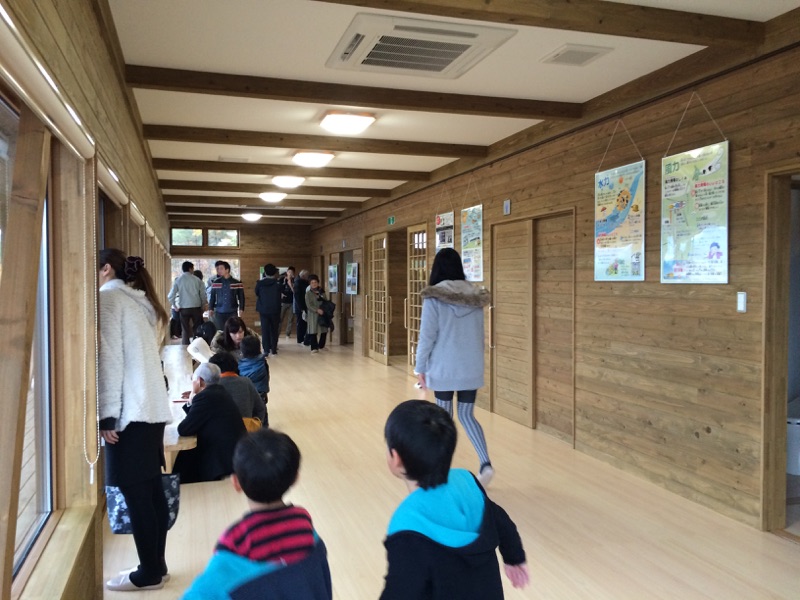 Cost of the project (blue sites in the above map, total 1,450kW) was some 420 million yen. The finance was structured with senior loan from local banks (Aizu Shinkin Bank and Aizu Commerce and Industry Credit Union), mezzanine finance from Green Finance Agency and citizen funding (Aizu Solar Citizen Fund), and capital finance of AiPOWER.

Aizu Solar Citizen Fund was arranged by Japan Green Fund, and called for investment from March 2014, total 99.8 million yen with the targeted interest of 2.0%, 200,000 yen per lot and 11 years contract period. Total 125 people invested in the fund and it was fulfilled by July 2014. Out of 125 citizen investors, 15.2% was from the residents in Fukushima, and the rest was from all over the country.

Under the national support framework of Feed in Tariff and various local stakeholders’ support, AiPOWER realized the first project successfully. However, as soon as the first solar project came into operation in the fall of 2014, the electric utilities announced stop signing contracts for purchasing renewable energy.

Facing the sudden backlash, Sato felt strong indignation, however, now he has many local supporters and community power colleagues all over the country [2], so they started to work together and made collective voice for fair grid connection and operation to the utilities and government [3].

The challenge of AiNEF and AiPOWER for the local autonomy goes on.

[1] The Freedom and People’s Rights Movement aimed to get the political control back to the public from the centralized Meiji government, and it demanded for democracy in the modernization time in Japan. Aizu area is said to be the birthplace of the movement, therefore renewable energy initiative has the symbolic meaning in terms of energy and democracy. Akasaka told the historical background of Tohoku region’s development in Asahi Shimbun August 1, 2014.

[2] Japan Community Power Association was established on May 23th 2014 with various members of community power enterprises and consumer cooperatives, and Sato has served as the executive director of the association.

[3] Japan Community Power Association’s press release October 2nd 2014: “Claim for the grid operation that maximize the community based renewable energy for the local innovation” (in Japanese).

The Pioneer of Community Wind in Japan